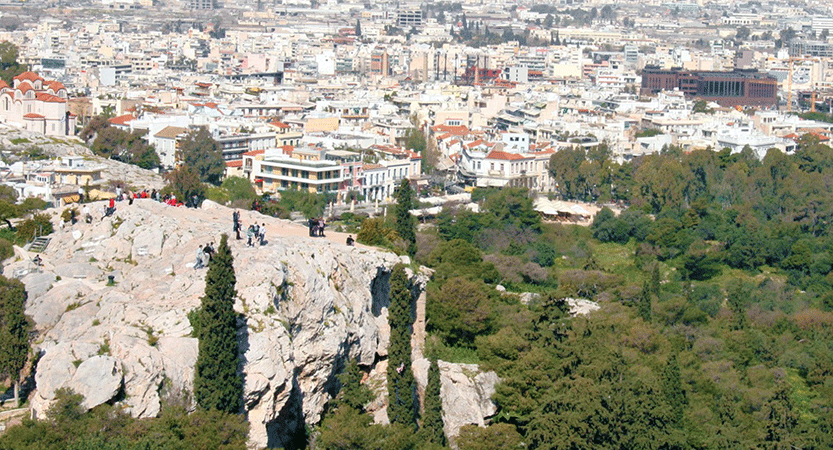 In Acts 17, we see Paul in three cities: Thessalonica (verses 1-9), Berea (verses 10-14), and Athens (verses 15-34). We’ve already discussed the major figures in the chapter, including Silas and Timothy as well as Paul. We also covered some minor “players.” We still need to consider two more minor individuals, as well as two groups of people. Paul encounters these people in Athens.

As with Jason, we know very little about Dionysius or Damaris, who appear at the end of the chapter. Luke, the author of Acts, identifies these two individuals by name as among those in Athens who “joined [Paul] and believed” (Acts 17:34, NASB throughout).

Luke refers to Dionysius as “the Areopagite,” which provides at least a small clue as to the manner of man he was. According to the article “Areopagite” in the Encyclopedia of the Bible, this addition to the name refers to a “member of the Council of the Areopagus.” This Greek word simply means “Mars Hill.” The Acropolis, which means something like “high city,” is adjacent to and overlooks nearby Mars Hill. The world-famous Parthenon sits on the Acropolis.

The council included former archons, or individuals elected to one-year terms as rulers of the city. (Nine archons with different functions served at any given time.) Once an archon had served for a year, he could never again be an archon. However, he automatically became a lifetime member of the Council of the Areopagus. By the time of Paul, the main function of the council was censorship, particularly in matters of religion.

Dionysius, then, was a prominent citizen of Athens, probably meeting Paul at a hearing to determine whether this “foreigner … should be allowed to circulate freely in the city” (“Areopagus,” Encyclopedia of the Bible).

We have even less information about Damaris. Luke mentions her “in the same breath” with Dionysius (Acts 17:34), a man of standing. That may mean she was also a prominent citizen. However, the Encyclopedia of the Bible notes that because “a respectable woman of Athens generally would not have attended such a public gathering, some have suggested that she was … an educated courtesan, a woman of low moral character.” On the other hand, Luke mentions her by name, which seems to support the idea that Damaris was someone of distinction.

At the Marketplace of Ideas in Athens

Luke tells us that besides speaking in the synagogue in Athens, Paul interacted “every day with those…present” (Acts 17:17) in the market. Luke identifies two groups of philosophers, the Epicureans and the Stoics, who conversed with Paul (verse 18). We’ll take a brief look at these two schools of thinking. Of course, any summary of their ideas for this blog post will, of necessity, leave out much.

If you’re like me—or like many people with only a cursory knowledge of philosophy—you’ll have false ideas about both groups. Coming into this study, I might have described the two groups as hedonists (the Epicureans) and masochists (the Stoics). And I would have been wrong!

As I learned more about the Epicureans, I was relieved to discover that I am not alone in my misconceptions. The online Encyclopedia Britannica article on “Epicureanism” explains that “the term was employed with an even more generic (and clearly erroneous) meaning as the equivalent of hedonism, the doctrine that pleasure or happiness is the chief good.”

The Encyclopedia of the Bible confirms that Epicureans sought pleasure. However, what that concept meant to them is far different from what we read into their thinking. In reality, “the Epicureans defined pleasure as the absence of pain. Their aim therefore was not so much the titillations of sense as it was the absence of pain, the avoidance of trouble, and freedom from annoyances.”

This desire to avoid pain put them at odds with the tenets of Christianity in a surprising way. One of the worst sources of pain for Epicureans, according to the Encyclopedia of the Bible, was the idea that “the gods punish evildoers.” As a result of this precept, Epicureans came to believe that “nothing ever comes about by divine power.”

I was just as surprised as I learned more about the Stoics. They were not masochists! Instead, according to the Encyclopedia Britannica, they believed in a personal responsibility toward fellow humans. They considered it their duty to “play an active role in world affairs.”

Their sense of duty, then, led them the opposite direction from Epicureans. The latter group, seeking to avoid pain, also avoided the entanglements of the world. On the other hand, as I noted above, the Stoics believed they had a duty to the world. As the Encyclopedia of the Bible states, the Stoics “deemed it worthwhile to run risks in order, for example, to raise a family and discharge civic responsibilities—two activities the Epicureans condemned.”

The Stoics, though they had some admirable ideas, were also at odds with Christianity. That’s because their world view held no place for God.

In my next post, I’ll look at some of the interesting terms Luke sprinkles throughout the chapter. in the meantime, please feel free to share with me what you’ve learned about Dionysius and Damaris, or about the Epicureans and Stoics.

Jason and Caesar in Acts 17

Persecuted for the Gospel’s Sake