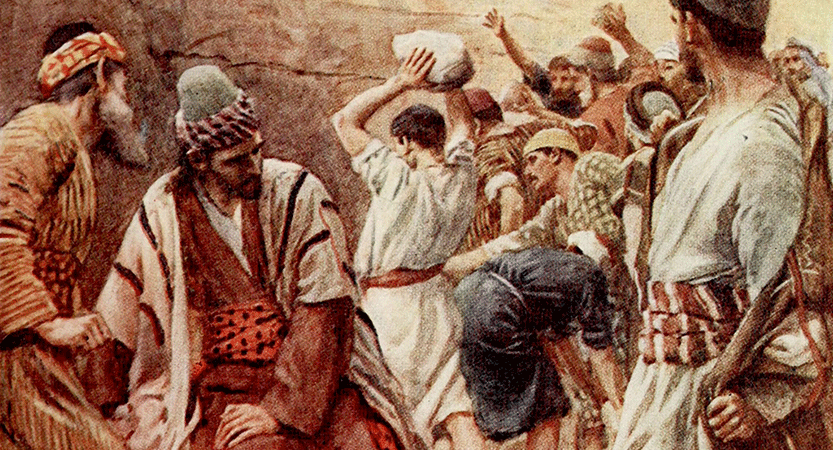 The young man Saul at the stoning of Stephen

To understand what happened when Paul visited Thessalonica and Berea (Acts 17), we must understand more about the man himself. Paul was a seemingly tireless pioneer of the faith taking the gospel message to the Gentile world. Before we can understand Paul’s contributions, we must understand his former life. We must come to grips with Saul the persecutor of Christians!

I do not use the words former life lightly. Paul, more than any other First Century Christian, exemplifies what it means to experience “baptism into death” and to “walk in newness of life” (Romans 6:4). In fact, his life story provides one of the most remarkable transformations from non-believer to believer.

Few of us have ever taken the time to ask why Paul attacked the “Way” (Acts 9:2) so vigorously. We don’t ask how his misguided zeal later shaped his perception of his own destiny. Today’s blog post will focus on the first issue, and next week’s will take up the second.

Saul the Persecutor “Consenting unto his Death”

We first encounter this individual as “a young man named Saul” (Acts 7:58) at the stoning of Stephen. Though young, Saul seemed to hold some official role. We read, for example, that “the witnesses laid aside their robes at the feet” of this young man. Luke, the author of Acts, tells us quite explicitly that Saul was “in hearty agreement” (Acts 8:1). [The more familiar wording of the King James Version is “consenting unto his death.“]

Luke continues his narrative, describing this zealous young man as “ravaging the church” (Acts 8:3). We rightfully describe him as Saul the persecutor of Christians!

What was it that led to this first recorded martydom of a Christian?

We know from the passage in Acts that the immediate justification for the stoning was Stephen’s words regarding his vision of “the Son of Man standing at the right hand of God” (Acts 7:55-58). This statement, though it may have triggered the stoning, does not explain why Stephen was dragged before the council in the first place (Acts 6:12).

To understand, we have to backtrack to the preceding chapter. Angry members of the Synagogue of Freedmen argued against Stephen’s radical teaching, but could not overcome his line of reasoning. Their only recourse, short of accepting the truth, was to drag Stephen before the Sanhedrin on trumped up charges (Acts 6:9-12).

The specific charges laid out before the Sanhedrin cannot really shed much light on the motivation for the simple reason that they were made by “false witnesses” (verses 13-14). To understand the real issue, we must understand something of the mindset of Pharisees during this formative period for the church.

The Threat to All That Matters

The Pharisees believed in a coming Messiah, and many believed the Messiah’s appearance was imminent. They rightly believed that nothing could thwart God’s will and the inauguration of a Messianic kingdom. However, they also believed that widespread disobedience to God’s Law could delay the arrival of the King. Observing the Law, including the oral law, was therefore not only a duty of the individual, but of the whole community.

The nascent Christian church, not yet recognized as a separate entity from Judaism, was teaching some revolutionary doctrines. Most alarming to the Pharisees, and even to the Sadducees, was the claim that Jesus was the Messiah.

Surprisingly, this alarm was not the result of claims that the Messiah had come. The issue was one of claiming that the crucified Jesus was the Messiah. Crucifixion, in the eyes of the Pharisees, indicated that God had cursed an individual. To these Pharisees, a statement in the book of Deuteronomy supported this view. The passage stipulates that “he who is hanged is accursed of God” (Deuteronomy 21:22-23). (This passage specifically refers to a criminal who has already been executed. After stoning the individual, the community hangs his dead body from a tree.)

First Century Jews witnessed the horrors of Roman crucifixions. As a result, they came to view the passage in Deuteronomy differently. Many of these Jews believed Deuteronomy applied not only to the display of an executed criminal, but to the means of execution. At any rate, in their eyes, the death Jesus died disqualified Him as the Messiah. In his book Paul: Apostle of the Heart Set Free, F.F. Bruce explains that a “crucified Messiah was worse than a contradiction in terms; the very idea was an outrageous blasphemy” (page 71).

A Stumbling Block to Jews

We can ascribe this sort of thinking to Saul the persecutor of Christians, according to the Zondervan Pictorial Encyclopedia of the Bible (volume 4, “Paul the Apostle, page 631), because Paul’s “later references to the scandal of the cross indicate that for him this was the great stumbling block” (1 Corinthians 1:23).

For the Pharisees, stamping out this apostasy was vital to preparing for Messianic rule. Many of them undoubtedly saw themselves in the role of Phinehas, who personally turned back a plague on Israel when he impaled an Israelite man and Midianite woman engaged in a sexually-debauched worship of Ba’al of Peor (Numbers 25:6-15).

When Phinehas acted, Israel was on the cusp of entering the Promised Land. Similarly, the Jews of the First Century were looking for the appearance of the Messiah to establish God’s Kingdom. Paul would have been among a zealous group of Pharisees intent on preventing a departure from the faith that would delay the arrival of the Messiah.

Let me know your thoughts, and especially if you discovered any gems in the life of Paul that help you understand later actions. When we resume our study of Acts 17, we’ll conclude our look at Paul, this time considering his role as a persecuted apostle to the Gentiles.