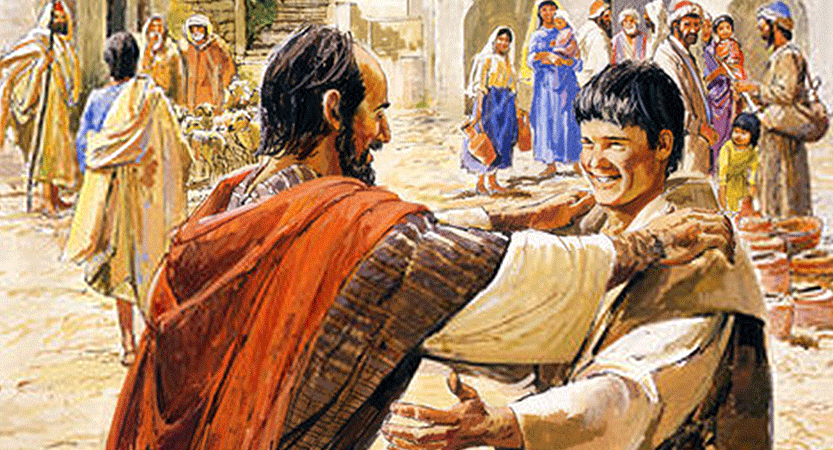 Paul and Timothy (used with permission by GoodSalt.com)

In my last post I wrote about Silas, and before that I devoted three posts to Paul. There’s one more major figure who appears in Acts 17, and that individual is Timothy. Today we’ll take a look at him, “reading between the lines” a bit to gain some insight into his role in the chapter.

Three Facts About Timothy Right Away!

We first meet Timothy soon after Paul and Silas set out on Paul’s second “missionary” journey. In fact, Luke (the author of Acts) barely began his account of the second journey before revealing three important facts about this young man. First, he was already a disciple; second, he was half Jewish and half Greek; and third, others respected him (Acts 16:1-2).

Timothy was already a disciple when Paul and Silas arrived in Derbe and Lystra. This fact suggests that the young man, or at least his mother Eunice and grandmother Lois (2 Timothy 1:5), responded to Paul’s teaching during his first visit to the area with Barnabas (Acts 14:21-23). We do know that even as a child he had “known the sacred writings” (2 Timothy 3:15).

Though we cannot be certain, Lystra seems more likely than Derbe to be Timothy’s hometown. One reason is that Paul alludes to his young protégé’s knowledge of “sufferings, such as happened to me at Antioch, at Iconium and at Lystra” (2 Timothy 3:10-11). It was at Lystra, during Paul’s first journey, that Paul enduring stoning (Acts 14:19). In fact, the people there left him for dead.

It’s the next verse that tells us something significant that Timothy may well have witnessed. Paul, “while the disciples stood around him…got up and entered the city” (verse 20). If Timothy, who was quite young at the time, witnessed this “resurrection,” he would have knowledge of Paul’s sufferings. He would also have personal knowledge of this astonishing miracle. That miracle followed closely on the heels of another, Paul’s healing of the lame man (verses 8-11).

Was Timothy a Jew or a Gentile?

The second fact that jumps out as soon as we meet Timothy is that he is only half Jewish. His mother Eunice was Jewish, but his father was Greek (or Gentile). Smith’s Bible Dictionary suggests that Timothy’s father had died while Timothy was quite young. The dictionary surmises this because Acts never mentions the father, and neither does Paul in his epistles.

Such a loss would have left Eunice and Lois unfettered in their efforts to teach Timothy the Scriptures. They would have done so initially as Jews, but later as Christian converts. The boy was not circumcised according to the Law (Leviticus 12:3), indicating at least some resistance from the father. This man undoubtedly shared the Greek perspective of circumcision as mutilation.

What happens next in the story is puzzling – Paul circumcised Timothy! He did so “because of the Jews who were in those parts, for they all knew that his father was a Greek” (Acts 16:3). What is puzzling is the context. Paul and Silas had barely begun their journey, on the heels of the “Jerusalem conference,” when this happened. It was at this conference that the apostles decided Gentile converts need not endure circumcision (Acts 15:1-2, 19-21).

Ironically, an uncircumcised Gentile named Titus had accompanied Paul and Barnabas to this very same conference. Paul later wrote that “not even Titus, who was with me, though he was a Greek, was compelled to be circumcised” (Galatians 2:3). So why did Paul, who had advocated for the acceptance of Titus and other uncircumcised Gentiles, circumcise Timothy?

We don’t know for sure, but it probably stems from Timothy’s mixed background. Perhaps Paul believed that for a young man reared as a Jew to be uncircumcised would have made him appear unrighteous. As such, other Christians might deem Paul’s protégé unworthy of any ministerial role. Gentiles, on the other hand, came to the table with a clean slate.

Luke brings a third fact to our attention as we meet Timothy. The members in Lystra and Iconium spoke well of him (Acts 16:2). He achieved this reputation in spite of setbacks, such as losing his father. Even more remarkable is that his mixed ethnicity, in a world in which that mattered, did not prevent him from acquiring this reputation.

More than that, this young man had been the subject of prophecies. Paul reminds his young protégé of this years later (1 Timothy 1:18). Unfortunately, we do not have much information regarding the timing of these prophecies. As a result, we cannot dogmatically state that they were a factor in Paul’s desire to have Timothy join him and Silas on their journey.

However, the Expositor’s Bible Commentary points out an interesting nuance of the wording of Paul’s statement. The NIV expression “once made” (“previously made” in the NASB) may also mean “leading to” or “going before.” This phrase, according to the commentary, “has sometimes been translated ‘according to the prophecies leading me toward you,’ or ‘predictions leading up to you.’”

We don’t know for sure whether these prophecies were key to the decision to include Timothy in Paul’s work. However, we do know that at some point the church as a whole came to understand the young man would play an important role in the ministry to the Gentiles.

My True Child in the Faith

When we look through Paul’s writings, we see that he seemed to have a special affinity for Timothy. In his two letters to Timothy, he addresses the young man as “my true child in the faith” (1 Timothy 1:2) and “my beloved son” (2 Timothy 1:2). In Paul’s first letter to the church at Corinth, he refers to Timothy as “my beloved and faithful child in the Lord” (1 Corinthians 4:17).

Of course, Paul also addressed Titus as “my true child in a common faith” (Titus 1:4). On the other hand, Paul’s special feeling toward Timothy comes out in more passages. One reason, according to the Encyclopedia of the Bible, is that “Timothy seems to have been one of the most constant companions of the Apostle Paul.” Other individuals came into and went out of Paul’s working ministry. Timothy seems to have had a special relationship with the apostle.

One reason may have been the youthfulness of Timothy. He must have been quite young when he first set out with Paul. We know this because Paul, as much as a decade later, still considered his protégé young. The apostle even advised Timothy not to let anyone “look down on your youthfulness” (1 Timothy 4:12).

There may have been more to the story, though. Paul addresses Timothy as his “true child” and “beloved son.” According to the Encyclopedia of the Bible, this terminology suggests Paul viewed Timothy a man who would continue his mission. In essence, Paul may have seen Timothy as his successor.

Why Does Timothy Disappear?

Now we can take a look at the objective of our Bible study, chapter 17. Luke does not mention Timothy in this chapter until explaining that the Jews of Thessalonica forced Paul to leave Berea (Acts 17:13-14). Acts tells us that when Paul left Berea, “Silas and Timothy remained there.”

Strangely, though Paul had circumcised the young man so that he could be of benefit to him and Silas in their efforts to preach the gospel (Acts 16:3), we read nothing of him between this act and the reference to him remaining in Berea. Luke does not mention Timothy as he describes the authorities beating Paul and Silas, and then imprisoning them in Philippi (Acts 16:12-40). Neither does Luke speak of the young man becoming a target of the mob at Thessalonica (Acts 17:1-10) that forced Paul and Silas to flee to Berea.

The fact that Timothy remains in Berea with Silas as Paul goes to Athens tells us that he accompanied the group all along. So why is he absent from the narrative? The Encyclopedia of the Bible suggests his youth as a reason. It may be that the young man, supporting the ministry of the two older men, did not yet play a critical role, one that would have gotten him into trouble with the authorities.

In my next post, I’ll begin looking at some of the “minor” characters who appear in chapter 17. In the meantime, let me know what you’ve learned about Timothy.

Saul the Persecutor of Christians

My Observations While Reading Acts 17