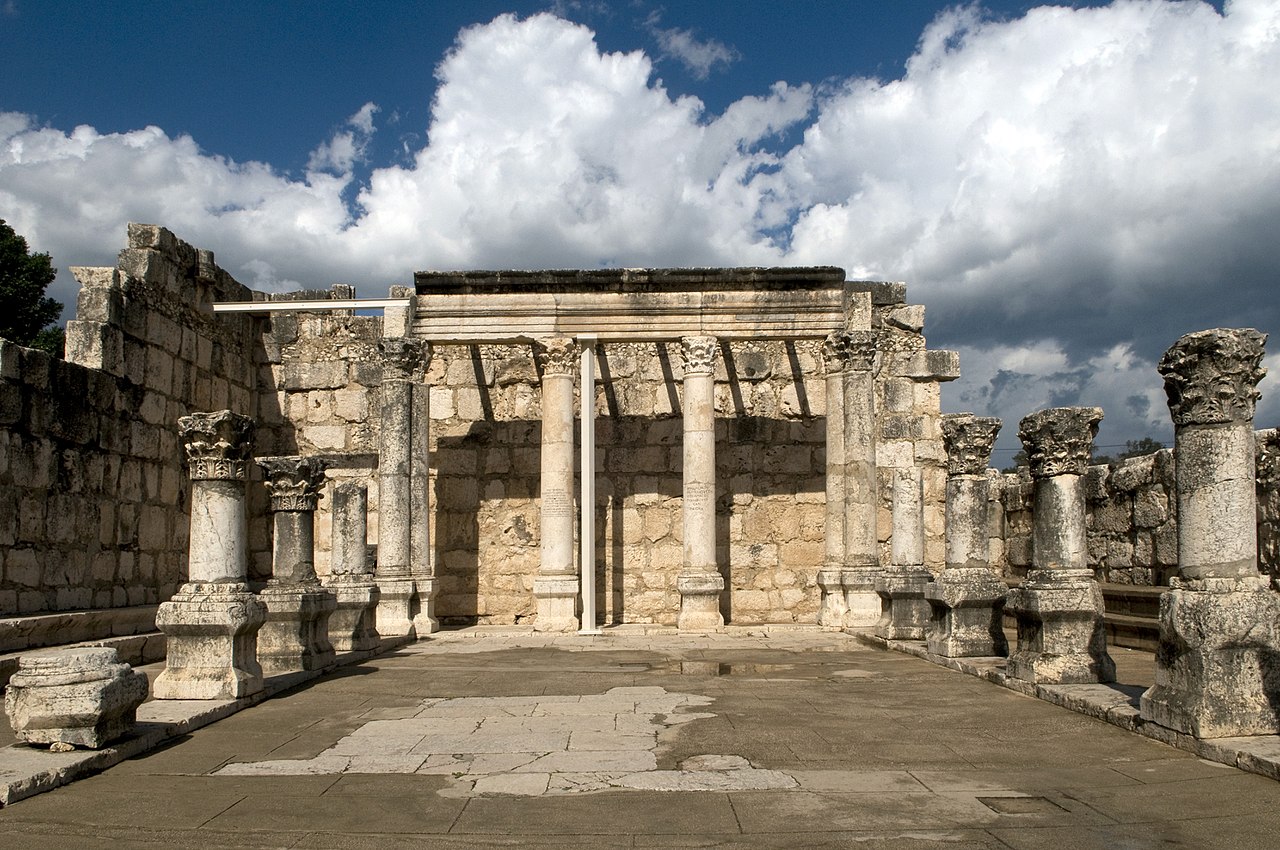 Ruins of the First Century synagogue at Capernaum

In my last post I wrote about the Via Egnatia, a major Roman highway Paul used in the account in Acts 17. This post will consider the last item I listed among my initial observations. That item is a cultural / historical institution, the synagogue.

It’s always important in Bible study – and other areas of life as well – to avoid making assumptions that can mislead you. Most of us probably think of synagogues as comparable to churches. Of course, in some ways they are. But as I began to dig, I discovered some significant differences between First Century synagogues and modern churches.

What Does Synagogue Mean?

My first stop was Vines Complete Expository Dictionary. Synagogue comes from the Greek sunagoge (Strong’s 4864), which means “a gathering of things, a collection.” This concept was eventually applied to people, coming to mean a gathering, or assembling, of people. As with the development of the word church, the term synagogue ultimately became associated with the buildings where religious gatherings occurred.

Since the word is Greek, and not Hebrew, we should not expect to find it in the Old Testament. I checked my Strong’s Concordance, which corresponds to the King James Version. I saw that the KJV translators chose synagogue to translate the Hebrew moed (Strong’s 4150) in Psalm 74:8. Apparently, translators created this anachronism, assuming that synagogues existed in pre-exilic Israel. Other translations, such as the NASB and NKJV, translate the Hebrew word as meeting places. The NIV renders it awkwardly as every place where God was worshipped.

The fact that synagogues do not appear in the Old Testament, but can be found all through the New Testament, suggests that they developed during the intertestamental period. The Encyclopedia of the Bible explains that we find:

…little documentary evidence before the Helenistic Age, the Elephantine Papyri and the New Testament for any synagogue. However, it must have come into being in the confused and disorganized state of affairs between the fall of the first commonwealth and the establishment of the second.

But why? And what purpose did they serve, especially since the temple / tabernacle was the venue for true worship?

When Did the Synagogue Appear?

Scholars disagree on the question because of the lack of definitive proof regarding the origin of synagogues. Unsubstantiated tradition holds that Moses founded the first synagogues. However, this is surely impossible for two reasons. First, he never entered the Promised Land. And second, the five books of Moses (the Torah, or Pentateuch) do not mention synagogues.

In contrast, the Torah does include a lengthy section prescribing how God wanted Israel to construct the tabernacle. In fact, this instruction is so important that it fills the last 16 chapters of the book of Exodus! Had Moses established the first synagogues, Scripture would undoubtedly make that clear.

So what did happen?

The Babylonian Captivity may well have created the circumstances. In essence, the Exile forced the surviving Jews to reconsider how they could survive as the People of God. The Babylonian army had destroyed Solomon’s temple in 586 B.C., taking all but the poorest survivors back to Babylon. In order to maintain their identity, the Jews had to preserve their Holy Scriptures, which meant they also had to preserve their language.

The need to preserve their identity meant that the Jews viewed synagogues in a different light from what we might have assumed. Emil Schurer, in his History of the Jewish People in the Time of Jesus Christ, states that “the main object of these Sabbath day assemblages in the synagogue was not public worship in its stricter sense, i.e. not devotion, but religious instruction, and this for an Israelite was above all instruction in the law” (Second Division, Volume 2, p. 54).

The need to preserve the Torah, as well as the other Scriptures, meant that the dominant activity at Sabbath synagogue meetings was reading of the text, followed by some explanatory remarks. This is not to say that worship never occurred. Prayers were recited and psalms were sung. Even so, in the Jewish mind prior to the destruction of Herod’s temple in 70 A.D., it was the temple, not the synagogue, that played the principal role in worship.

Throughout the Known World

In The New Testament Era, Bo Reicke writes that “in the time of Herod and the apostolic period [synagogues] were to be found in every important city from the Tigris to the Tiber” (p. 120). The apostle James confirms this at the conclusion of the Jerusalem conference when he states that the Torah, or five books of Moses, are read in synagogues every Sabbath in every city (Acts 15:21).

[Because the book of Acts tells the story of the gospel spreading into the wider world, this list does not include the synagogues in Galilee and Judea.]

What is remarkable about this prevalence of synagogues throughout a world largely dominated by Rome is that the Roman government viewed public assemblies with great suspicion. In fact, such gatherings were specifically outlawed in 55 B.C. by the Licinian law, which was a response to the history of civil unrest linked to fraternal organizations. This distrust was so strong that the Emperor Trajan refused to allow a provincial governor to create a volunteer fire department (Reicke, p. 308).

So why were Jews allowed to meet in their synagogues?

After Jewish soldiers supported Julius Caesar in his war against Alexandria, Egypt (48-47 B.C.), he granted them a number of privileges, one of which was an exemption from the Licinian Law. Because Christians in the time of Paul were still considered a sect within Judaism, Christians could assemble without fear of the state – until Nero changed things!

So what are your thoughts? Have you discovered anything you’d like to share? I’d love to hear from you. In the meantime, think about how you would outline Acts 17 (which is the subject for my next post). If you’re not sure how to go about outlining a chapter, take a look at the post I devoted to outlining Luke 10 for our study of the Parable of the Good Samaritan.

The Bereans – What We Can Learn From Them?