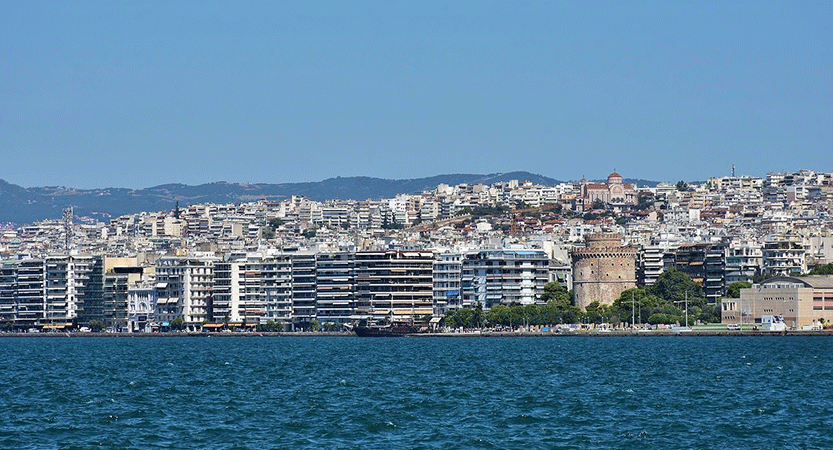 Modern Thessaloniki from the Thermaic Gulf.

My last post concluded our study of the people of Acts 17. In that post, we looked at Dionysius and Damaris as well as considering the Epicurean and Stoic philosophers. Today, we’ll examine an important expression, “God-fearing Greeks.” This term leads us to an important concept: proselytes in the Greek world.

Whenever I study the wording of any passage, I start with my Strongest Strong’s Exhaustive Concordance of the Bible. As I’ve mentioned in previous blog posts, I prefer to study with the NASB. This translation is one of the most literal in English. My concordance, however, corresponds to the King James Version.

For that reason, I must take the extra step of comparing the NASB text to the KJV text. I do so to discover the exact wording I need to search, and then go to my concordance. (If you want to avoid this step, you can always obtain a copy of Strong’s keyed to the NASB.)

Once I’ve looked up the word and obtained the Strong’s number for it, I then consult my copy of Vine’s Complete Expository Dictionary. This resource has more complete discussions of the words, though it covers only the most important expressions.

The expression we’ll explore today is “God-fearing Greeks.” Luke, the author of Acts, introduces this expression in verse 4. He describes some of the people who joined Paul and Silas after they had spent three consecutive Sabbaths in the synagogue at Thessalonica “giving evidence that the Christ had to suffer and rise again from the dead” (verse 3). Who were these Greeks, and why were they at the Jewish synagogue?

The King James Version translates the NASB expression “God-fearing” as “devout” (Acts 17:4). These English words are attempts to translate the Greek σέβομαι (sebomai, Strong’s 4576). According to Vine’s, this word means “to feel awe” or “to worship.” That, however, does not really answer our questions, so in this case, we’ll need to dig a little deeper.

Getting Creative in Research

This is the type of situation in which you’ll need to summon up some tenacity and creativity in your research. When you do, you will often be rewarded with understanding.

Here’s what I did. I took a second look at this encyclopedia entry. I noticed that the article listed the word “devout” in connection with “converts to Judaism,” “women of high standing,” and “persons” in three other verses in Acts. The encyclopedia suggests that this latter use refers to proselytes. That word is similar to converts, which became my next lead!

I then checked the Encyclopedia of the Bible to see whether there was an entry for “Converts,” but there wasn’t. There was an entry for “Conversion” that does not really address our questions. Fortunately, there is an excellent and extensive article, “Proselyte,” which does a thorough job. I don’t have time in this post to do more than point out a few highlights of the article.

The Greek word σέβομαι (sebomai, Strong’s 4576) is more nuanced than the English “proselyte,” which the online Merriam-Webster dictionary defines as “new convert.” The Greek concept surrounding conversion changed with the times and the circumstances of the Jewish people.

By the First Century, the Jews had spread throughout the Roman Empire. With the exception of individuals living in Judea and Galilee, most Jews lived as a minority among people with radically different cultures and ideas. This situation presented difficulties, including persecution. It also presented opportunities to fulfill a role God had always intended – for His people to be a blessing to the world.

The Encyclopedia of the Bible explains that, due to their minority status, “the Jews became intensely self-conscious. The Greeks and others were quite curious of Jewish customs and rites and were fascinated by them. The great attraction was the Jewish morality founded on ethical monotheism” (“Proselyte,” section 6 “The Greek world”).

Making Proselytes of the God-Fearing Greeks

Jewish communities of the First Century seem to have been extremely zealous in their evangelizing activities. Josephus wrote that the Jews “also made proselytes of a great many of the Greeks perpetually, and thereby, after a sort, brought them to be a portion of their own body” (The Wars of the Jews 7.3.3.45). We even see this fervor reflected in the gospels. As Christ condemns the Pharisees for their misdirected zeal, one of His illustrations calls out their missionary activity (Matthew 23:15).

So in this Greek world awash in superstition that failed to satisfy the heart, there was a hunger. The Jews held out a hope through their worship of a single God. Their religion, though it included ritual, placed greater emphasis on morality. This was an anomaly in the ancient world, and it was a breath of fresh air to the Gentiles. But there was a big problem!

You Want To Do What?

In the same way that baptism signifies the beginning of the covenant relationship between an individual Christian and God, circumcision served as the outward sign of Israel’s covenant relationship (Genesis 17:9-14). For any foreign male attracted to Judaism, the only path toward full acceptance into a Jewish community meant being circumcised.

This was not an easy step for Gentile proselytes, whose culture viewed circumcision as disfigurement. The ancient Greeks viewed the human body – particularly the male body – as the aesthetic ideal. There could be nothing more beautiful.

Because Greek culture had become prevalent throughout the Mediterranean world, this negative view of circumcision became an issue among Jews living under Antiochus Epiphanes during the Second Century B.C. An account in the apocryphal book 1 Maccabees designated some Jews as “renegades.”

These Jews had asked for permission to build a gymnasium, and the Seleucid authorities granted their request. What caused the problem was the Greek custom calling for athletic competitors to participate naked. These Jewish athletes “removed the marks of circumcision, and abandoned the holy covenant” (1 Maccabees 1:14-15, New Revised Standard Version, Catholic Edition).

Josephus also describes this sad moment in Jewish history: “wherefore they desired his permission to build them a Gymnasium at Jerusalem. And when he had given them leave they also hid the circumcision of their genitals, that even when they were naked they might appear to be Greeks” (Josephus, Antiquities of the Jews, 12:5:1, Line 241).

God-Fearing Greeks as Proselytes at the Gate

The choice about whether to undergo circumcision introduced a moment of hesitation to the path of Greek proselytes, or at least the males. (There is ample evidence that the number of female proselytes far outnumbered the number of males. Circumcision undoubtedly presented a major challenge, if not the main one.)

For this reason, the rabbis adopted terms to indicate the status of proselytes. There were proselytes of righteousness and proselytes at the gate. The former described Gentiles who accepted all the demands of the law, including circumcision. The latter term encompassed those who were not ready for circumcision. The imagery perfectly captures the idea of an individual pausing before entering the community. Though scholars disagree about this issue, many identify the God-fearing Greeks in Acts 17:4 with the uncircumcised proselytes at the gate.

The Encyclopedia of the Bible surmises that “for every full convert to Judaism there were many partial converts who accepted almost all of Judaism in the realm of belief and practice with the exception of circumcision. They were referred to in the [First Century] as ‘those who fear (worship) God’” (“Proselyte,” section 8.b. “Types of converts: God-fearers and worshipers of God”).

When Paul and Silas preached the gospel message, they did so after the Jerusalem conference had addressed the issue of circumcision. At that meeting, the apostles determined that Gentile converts need not undergo this painful, and culturally difficult, ritual. It is no wonder that Paul’s message persuaded “a large number of the God-fearing Greeks” (Acts 17:4). It is also easy to see why the Jews, who had surely invested considerable time to teaching these God-fearing Greeks, became so “jealous” (verse 5) when they lost their proselytes to Paul and Silas!

So what are your thoughts? What have you discovered in your research? Please feel free to comment! In the meantime, keep studying. In my next post, I’ll take a look at a few other terms.

Who Was the Timothy of Acts 17?

The Bereans – What We Can Learn From Them?