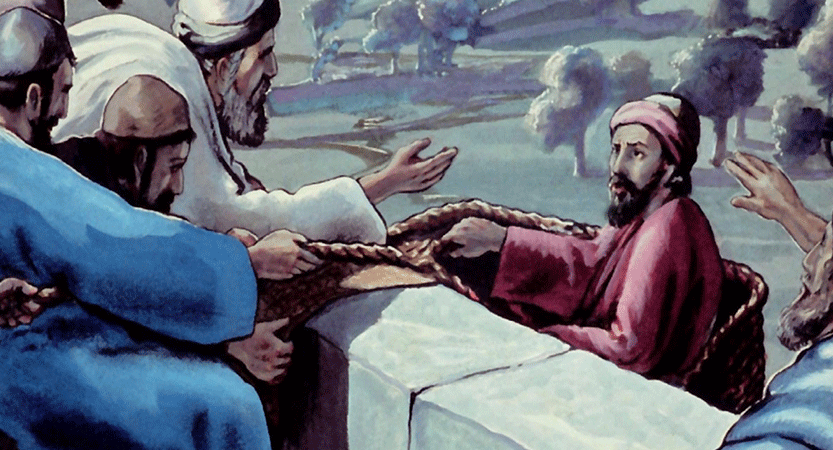 In my last blog post, I wrote about Paul’s former life as Saul, the strict Pharisee who saw the fledgling Christian movement as a threat to the way of life he held so dear. As a consequence of that perceived threat, Saul had sought to destroy anyone who taught what he considered blasphemy. Today we’ll look at how Saul, a one-time persecutor of Christians, became Paul the persecuted. To do so, we’ll first look at his conversion. Then we’ll consider his early work leading up to the encounter with the members of the Berean synogogue.

As I mentioned in my last post, we “meet” Saul in Acts 7, the dramatic account of the trial and stoning of Stephen. Saul played a major role, mentioned a bit matter-of-factly at the end of the chapter (verse 58). The next chapter begins by describing Saul as “ravaging the church” (Acts 8:3). Luke then tells us that Saul was “still breathing threats and murder against the disciples of the Lord” (Acts 9:1).

It is this chapter that first describes Saul’s conversion. Before we take a look at the specifics, though, we should notice that the book of Acts places great significance on Saul’s conversion experience. Luke gives us the story in narrative form in chapter 9. However, he also draws on the apostle’s own words in chapter 22 and chapter 26 to retell the story.

In both of those later chapters, Luke quotes Paul in great detail. He devotes 11 verses (6-16) in chapter 22 and seven verses (12-18) in chapter 26 to this theme. Paul addresses an angry Jewish mob in Jerusalem in the first. He speaks directly to King Agrippa in Caesarea in the second. It seems Luke wanted his readers to be familiar with the details of this conversion, essentially telling the story three times.

In fact, understanding some of the details surrounding Saul’s conversion is key to understanding how these events shaped his perception of his own destiny. It helps us understand how he moved from persecutor to persecuted.

To Kick Against the Goads

There is an odd expression that appears in only one of the three accounts of Saul’s conversion. The resurrected Jesus tells Paul, “It is hard for you to kick against the goads” (Acts 26:14). This statement immediately follows the question of the heavenly voice, “Saul, Saul, why are you persecuting me?” Paul immediately responds, asking, “Who are You, Lord?” The accounts in chapter 9 and chapter 22 each include the surrounding questions. However, neither contains the statement sandwiched between them in chapter 26.

We may think of this statement as odd. Much of the Greek-speaking world of the First Century would have recognized it immediately. Zondervan’s Pictorial Encyclopedia of the Bible notes two well-known Greek playwrights, Euripides and Aeschylus, who used the idiom in their works. The idiom signifies opposition to a divine being.

Why Use a Greek Idiom?

Why would Luke include this statement only in the account of chapter 26? Perhaps he did so because that account specifically relates Paul’s address to the Hellenized King Agrippa. For Agrippa, the idiom would be significant.

For us, however, it’s not the statement itself that is important. What matters to us is how it defines the encounter between a zealous young Pharisee and his God. Saul, who later becomes known to us as Paul, discovers quite dramatically that he had lived his life in opposition to the very God he thought he served! This thought never leaves the apostle Paul. His letters contain hints of his remorse over the devastation he wrought among the early church.

It was this conversion experience that brought a blinded Saul to his knees. He sought restoration of his eyesight through the power of “the Lord Jesus” (Acts 9:10-12, 17-18). Saul, who had rejected the crucified Jesus as an accursed imposter, now saw the resurrected Jesus as God.

Persecuted as a Suffering Servant

As I explained in my last blog post, the Jews simply could not understand a Messiah who had been put to death in a way that signifies being cursed by God. What had been a stumbling block to the Pharisee Saul, that is a crucified Messiah, became a crucial element of the Christ the apostle Paul taught.

Paul explains that “Christ redeemed us from the curse of the Law, having become a curse for us—for it is written, ‘CURSED IS EVERYONE WHO HANGS ON A TREE’—in order that in Christ Jesus the blessing of Abraham might come to the Gentiles” (Galatians 3:13-14).

Did you notice that? It was through suffering, the suffering of Christ, that Paul was able to take the message to Gentiles. This passage explicitly tells us of the Messiah’s suffering, but it also hints at Paul’s. That may be why R. Alan Cole, in his article, “The Life and Ministry of Paul,” in the first volume of The Expositor’s Bible Commentary, asserts that “Paul sees his apostolic task in terms of the ‘suffering-Servant’ theology of the second half of Isaiah” (page 570). Paul knew he would be persecuted.

Theology of the Persecuted

Paul came to understand that Isaiah 53 portrayed Christ’s very death. The passage even tells us that “we ourselves esteemed Him stricken, Smitten of God, and afflicted” (verse 4). When we look closely at Paul’s writings, as well as passages in the book of Acts, we catch other glimpses of this “suffering-Servant theology,” especially as it relates to those who would follow Christ.

For example, Paul speaks of “being poured out as a drink offering” (2 Timothy 4:6) and desiring to know “the fellowship of His sufferings, being conformed to His death” (Philippians 3:10). He even declared “I rejoice in my sufferings for your sake” (Colossians 1:24). There are hints throughout Paul’s writing that he sees himself as a suffering servant of the Suffering Servant! Paul had moved from persecutor to persecuted.

We also see this concept in the book of Acts. After Ananias confesses his misgivings to the Lord about seeking out Saul of Tarsus, the persecutor of the church, the Lord tells Ananias not only that Saul will become God’s instrument to reach the Gentile world, but that he will do so through suffering: “Go, for he is a chosen instrument of Mine, to bear My name before the Gentiles and kings and the sons of Israel; for I will show him how much he must suffer for My name’s sake” (Acts 9:15-16).

What Does This All Mean?

In some ways I feel that I may have spent too much time on Paul, using three separate posts to discuss his general background, his role as a persecutor, and his conversion and subsequent suffering. On the other hand, I believe all of this information can help us understand what is really going on in Acts 17 as Paul speaks to both Jews and Gentiles in Thessalonica, Berea, and Athens, many of whom accused him and his companions of having “upset the world” (verse 6), or “turned the world upside down” in the King James Version.

When we realize that Paul never could forget how much damage he had inflicted on the early church, and how he had come to understand the value of suffering in God’s plan, we begin to understand how he could and why he would thrust himself into such dangerous situations. We can also understand why he so willingly embraced his role as one of the persecuted.

What about your studies of Paul? Have you learned anything you’d like to share? I’d love to hear from you.

Who Was the Timothy of Acts 17?