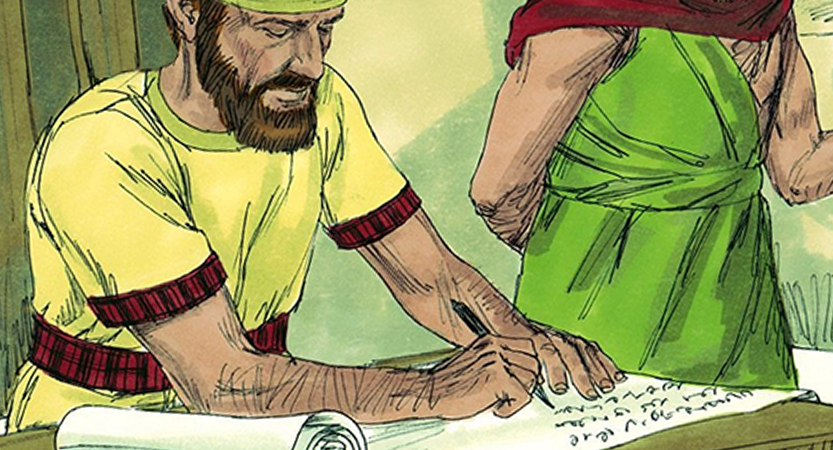 In my last post, I wrote about marginal notes, an often-overlooked study aid right in front of our faces. Today, using some of the clues we discovered in the marginal notes, we will consult the Encyclopedia of the Bible and a couple of commentaries, which will help us learn about Baruch’s family tree.

[NOTE: The various references I cite, as well as the Bible translations, transliterate Hebrew names differently. To maintain some degree of consistency, I use the spelling from the NASB, except in the case of article titles or direct quotes.]

Looking at the Family Tree

The very first marginal note for Jeremiah 45 cites Jeremiah 32:12, which provides not only the name of Baruch’s father (Neriah), but also his grandfather (Mahseiah). When we research this important piece of information, we see hints that Baruch whose family tree includes some influential individuals.

For instance, toward the end of the book of Jeremiah, we read of another “son of Neriah, the grandson of Mahseiah” (Jeremiah 51:59). That man is Seraiah, who is identified as a traveling companion of King Zedekiah during his trip to Babylon to defend himself from charges of participating in a rebellion against Nebuchadnezzar.

This man, who seems to have been Baruch’s brother, held an important office in the king’s administration. Depending of on the translation of Jeremiah 51:59 you read, Seraiah served as the king’s “quartermaster” (ESV, NASB, NKJV, NRSV, RSV), staff officer (NIV), or “quiet prince” (KJV). The Encyclopedia of the Bible article about Baruch calls Seraiah the “chamberlain to Zedekiah.”

It’s interesting that Jeremiah entrusted to this individual two important duties. First, Seraiah was to read aloud a prophetic scroll about the demise of Babylon there in Babylon itself. What a gutsy act, especially when accompanying a king being questioned about his role in a widespread regional conspiracy against Nebuchadnezzar!

Second, once he had read the scroll, he was to perform the symbolic act of throwing the scroll – weighed down with a rock – into the Euphrates River. Surely this important individual had more than a casual acquaintance with Jeremiah!

The Missing Link in the Family Tree

Unfortunately, the article about Maaseiah in the Encyclopedia of the Bible does little more than list people with that name in Scripture. The article shows that the name occurs in post-exilic as well as pre-exilic times, and among the different tribes of Israel, so it seems to have been a popular name. It tells us nothing about Baruch’s family tree.

Because this article does not attempt to link any of the 21 entries for Mahseiah, I consulted the Expositor’s Bible Commentary as well as Barnes’ Notes. Both commentaries link Baruch to the Mahseiah (2 Chronicles 34:8) who served in the administration of Judah’s last righteous king, Josiah.

Again, as with the role of Seraiah, the translations differ in their rendering of the title. Mahseiah was either the “governor of the city” (ESV, KJV, NKJV, NRSV, RSV), an “official of the city” (NASB), or “ruler of the city” (NIV), depending on which Bible you read. For our purposes, all that matters is that both Mahseiah and his grandson Seraiah held influential positions.

One other tidbit of information is worth mentioning. The Hebrew word translated as “governor,” “official,” or “ruler” in the listed translations is sar (Strong’s 8269). This same word is the one translated “Prince” in the famous passage about our coming Prince of Peace (Isaiah 9:6).

What’s All This Plucking and Planting?

In my last post, I mentioned that one of the facts we uncovered through the marginal notes is that when God addresses Baruch, through Jeremiah, He uses language reminiscent of the words He used while commissioning Jeremiah. Let’s consider the passage.

In some of the most encouraging words in Scripture, God tells the youthful Jeremiah that He had set him apart for holy service even before he was born (Jeremiah 1:5). The young man, convinced that the job is more than he can handle, objects, pointing out that he does “not know how to speak” (verse 6). God then reassures Jeremiah that He will be with him and will protect him (verses 7-8).

Finally, God tells the young man what his job will entail. The prophet has been appointed “over the nations and over the kingdoms to pluck up and to break down, to destroy and to overthrow, to build and to plant” (verses 9-10). It is with this language that we have a parallel in God’s declaration to Baruch that “what I have built I am about to tear down, and what I have planted I am about to uproot, that is, the whole land” (Jeremiah 45:4).

The six verbs describing Jeremiah’s commission, taken from agriculture (pluck, plant), construction (break down, build), and warfare (destroy, overthrow), show that great changes are in store for the nations and kingdoms of the time. Furthermore, it is God who is making those changes, and He has called Jeremiah to proclaim the warning messages, not just to the nation of Judah, but to all the surrounding peoples.

This same imagery, particularly the agricultural verbage, recurs throughout the book of Jeremiah. At one point, Jeremiah is told that Judah was like a green olive tree that God had planted (Jeremiah 11:9, 14-17), but now plans to burn. In another place, after commanding the prophet to go to the potter’s house to observe how he works, God tells Jeremiah that, like the potter, He can deal with nations however He wishes (Jeremiah 18:1-10). The words He uses – uproot, pull down, destroy, build up, and plant – are some of the same words we’ve seen before.

Another passage where we see these same words is one better known for God’s promise of a new covenant (Jeremiah 31:31-34) based on His law being placed into the hearts of His people. Just a few verses earlier, God describes His intent to “sow the house of Israel and the house of Judah” (verse 27) in the end times. He then explains that with the same care He took “to pluck up, to break down, to overthrow, to destroy and to bring disaster,” He would exercise when the time comes for Him “to watch over them to build and to plant” (verse 28).

So what does all of this mean for our understanding of Jeremiah 45? We’ve learned that Baruch came from an influential family. His grandfather served in the administration of Judah’s last righteous king, seeing first-hand the reforms set in place to rid the land of its idolatry. Baruch’s brother occupied an important role in the government of King Zedekiah. More than that, Jeremiah trusted Baruch’s brother enough to give him an important prophetic role.

Baruch undoubtedly had great plans for his life. He had grown up in a family with a history of remaining faithful to God. The young man was educated, and he had the right connections, so it seemed only right to expect great things. The Expositor’s Bible Commentary on the chapter sums up the situation nicely:

He may have had hopes of attaining a high office or even of receiving the gift of prophecy. But such expectations were not to be realized. Rather, he was to spend his life in a secondary role.

But there may well have been more to it. The faithful scribe undoubtedly lamented, as did Jeremiah, the coming destruction of his beloved nation. God does not condemn Baruch, but does gently remind him that he had a job to do. There was no place for personal ambitions opposed to the plan of God to “pluck up and to break down.”

In my next post I’ll discuss Ananias and Sapphira. Your assignment, then, is to read their story (Acts 4:32-5:11) at least five or six times. In the meantime, please share your comments on what you’ve learned about Baruch and God’s message to him.

Who Were the Philistines in the Bible?

Application of the Parable to My Life