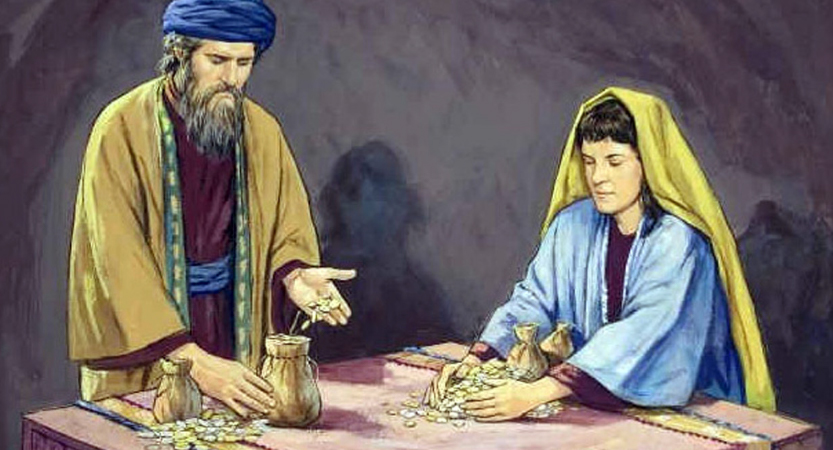 In my last post, I wrapped up our look at Baruch and God’s message to him in Jeremiah 45. Today we’ll launch our three-part study of Ananias and Sapphira, whose misunderstood death has been the source of some wild speculation and some questionable conclusions. For instance, today there is at least one U.S. group following a communal lifestyle based on their understanding of the early chapters of the book of Acts.

What are we to make of the early church concluding that “all things were common property to them” (Acts 4:32)? Did Ananias and Sapphira die because they rejected a primitive form of communism, or is there something else going on in this passage?

Observations in the Story of Ananias and Sapphira

As with any inductive Bible study, we’ve begun by reading the passage we plan to study (Acts 4:32-5:11) multiple times. Hopefully, as you are becoming more familiar with the inductive method, you are asking yourself lots of questions about what you are reading.

Our second question is linked to the concept of holding all things in common – it is lands and houses that are being sold (Acts 4:34-35). What land, and what houses? Did the sellers become homeless, or were there a considerable number of wealthy landowners being converted?

The next question addresses something completely different. You probably noticed that when Ananias is condemned, he is charged with lying to the Holy Spirit (Acts 5:3), but when Peter confronts Sapphira, he asks why she and her husband had “put the Spirit of the Lord to the test” (verse 9). What do these expressions mean? Does the difference between the two charges signify anything?

Now, Look at the People

As we read through the 17 verses in our study, we should notice that there are four key players. Two, of course, are Ananias and his wife Sapphira (Acts 5:1). We’ve also mentioned the apostle Peter (Acts 5:3). The final player is Joseph (Acts 4:36), whom the apostles had nicknamed “Son of Encouragement.”

We’ve already noted the practice of selling one’s goods and donating the proceeds to the group (Acts 4:34-35), but now that we are focusing on people, another question arises. Up to this point in the narrative, no individual had been specifically identified as having donated money from the sale of property. Immediately after these two verses, however, we are given a specific example, that of Joseph, called Barnabas (verses 36-37).

Joseph is identified as a Levite and a Cyprian, but even more interesting is the fact that this individual drops out of the story as abruptly as he enters. Is there a reason?

Plans for Understanding Ananias and Sapphira

Now that we’ve gone through the text, making observations and asking questions, we need to begin our research. Here’s my plan of attack for the next week. (You can follow the same approach, but don’t be afraid to branch out on your own to answer your own questions about the passage!)

First, I’ll look at marginal notes. I’ll pay particularly close attention to the notes connected to any statements about the early believers sharing their belongings. By referring to similar passages, we may be able to see the practice in its larger context.

Other marginal notes that could help us are the ones connected to Joseph. In one verse (Acts 4:36) in Bible Gateway’s NASB there is one footnote, and there are three cross references, connected to three words: Cyprian, Barnabas, and Encouragement. Since the narrator seems to have been quite deliberate in placing this individual’s actions immediately before those of Ananias and Sapphira, it would be a good idea to pay attention to all these marginal notes.

To the Encyclopedia and Atlas!

It’s always a good idea to look up all the people and places named in a passage to see what scholars might have to say about them. Consider looking up the four individuals we’ve identified – Ananias, Sapphira, Peter, and Joseph – in a Bible encyclopedia. (For Joseph, you’ll probably want to look under his nickname Barnabas.) Whether you own an encyclopedia or not, you can look in Bible Gateway’s Encyclopedia of the Bible.

In addition, it would be a good idea to look up Cyprian (or Cyprus) as well as Levite so we can learn more about who Joseph was. I also plan to look Cyprus up in at least one of my Bible atlases. If you’ve got an atlas, or at least some maps in the back of your Bible, see whether you can find Cyprus, and what you can learn about the place.

In my next post, I’ll let you know what I learned about the early church and its practice of considering “all things…common property” (Acts 4:32). In the meantime, let me know what questions you’ve asked yourself as you read through this passage!