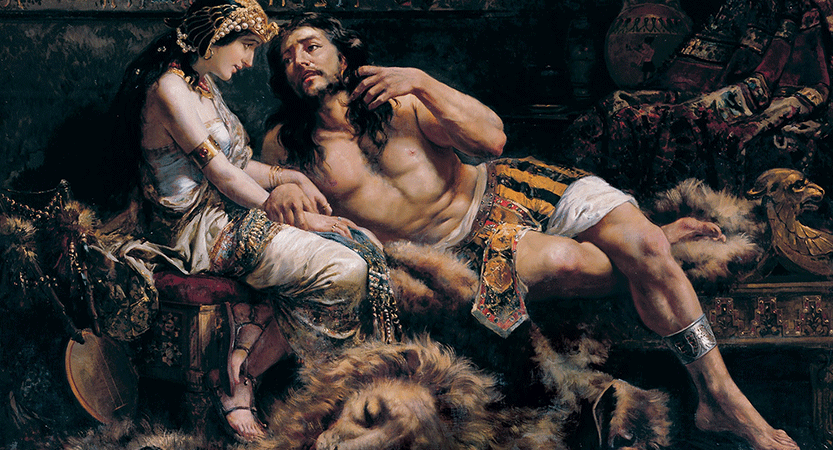 You’d be hard-pressed to find a more tragic story of seduction and betrayal than that of Samson and Delilah in Judges 16. If you’ve already read chapter 14, you already know of one of Samson’s great weaknesses. It’s in that chapter that Samson’s new wife pesters him for the answer to the riddle he posed to 30 Philistine wedding guests, only to reveal that answer to them so they could win a wager with Samson.

So when Delilah urges Samson to tell her the secret to his great strength, you might find yourself mouthing the words “Don’t do it!” much as you might while watching a movie or TV show in which the hero or heroine is about to make a big mistake. Samson, though, has not learned from his previous experience.

It’s what happens next that may strike you as a bit odd. Samson loses his tremendous strength after Delilah’s betrayal. She arranged to have his hair cut while he slept. Exactly what are we to make of this development? How can hair length affect strength?

To appreciate this passage, we must first understand its cultural context. That means learning about Nazirite vows.

It was never Samson’s idea to grow his hair long. Before he was even born, the angel of the LORD appeared to his mother, telling her that she would have a son, and instructing her to raise him as a Nazirite (Judges 13:3-5). Once the boy became a man, he would “begin to deliver Israel from the hands of the Philistines” (verse 5).

Manoah and his wife, who remains nameless in Scripture, understand what has been directed. The law provided a means for men and women to set themselves apart for special service to God. We see the specifics in Numbers 6. In fact, most of the chapter describes the duties and requirements for anyone inclined to take a Nazirite vow.

Before we look at those requirements, we should understand their objective. According to the Zondervan Pictorial Encyclopedia of the Bible, “God’s purpose in establishing the Nazirite group was to raise up within Israel a class of devoted spiritual leaders, to whom He in turn would grant special powers, filled with the Holy Spirit” (“Nazirite, Nazarite,” volume 4, p. 392).

Second, the Nazirite was to avoid cutting or shaving the hair on his or her head (verse 5). Finally, whoever vowed such a vow was to be careful not to come in contact with a dead body, even if a close family member died (verses 6-7). Most vows were for a stipulated period, after which the Nazirite made the prescribed offerings (verses 13-17) and shaved his or her head (verse 18).

Samson was one of only three known cases of individuals who were Nazirites from birth. The others were Samuel (1 Samuel 1:9-20) and John the Baptist (Luke 1:13-15). In each case, the parents were responsible for starting their sons on the road to Nazirite service, and in each case, the men had important roles to fill. Samuel was given “to the Lord all the days of his life” (1 Samuel 1:11); John was to “turn many of the sons of Israel back to the Lord their God” (Luke 1:16); and Samson was to “begin to deliver Israel from the hands of the Philistines” (Judges 13:5).

With this understanding, we see that Samson was not very careful in his observance of at least one of the requirements. Rather than choosing to avoid contact with the carcass of a lion he had killed, Samson scooped honey out of it, “eating as he went” (Judges 14:8-9). By breaking his Nazirite vow, Samson was guilty of betrayal. He had betrayed God in his carelessness!

Scripture also lets us know that he knew better. The book of Judges tells us that he chose not to tell his parents the source of the honey when he gave them some.

At the beginning of this post, I asked “what are we to make of this development?” and “How can hair length affect strength?” The answer to both questions comes from Numbers 6. The Nazirite is to be “holy” before God. In the case of Samson, as with Samuel and John the Baptist, God had a special role in mind. It was God, through the power of His Holy Spirit, who gave Samson his great strength. The hair – in and of itself – made no difference. What did make a difference was Samson’s indifference to the obligations of holiness as a Nazirite. And because of that indifference, the LORD left Samson (Judges 16:20).

But fortunately, the story does not end there. Samson, humbled by his own betrayal of God, and Delilah’s betrayal of Samson, comes before God in prayer. He asks for strength to fulfill the mission given to him from birth.

As a savior, or deliverer of Israel, Samson once more draws on God-given strength to defeat the Philistines. And surprisingly, we learn that “the dead whom he killed at his death were more than those whom he killed in his life” (verse 30).

Next week we’ll finish this initial series of posts about context with a look at geography. But before you go, take some time to share your thoughts below.