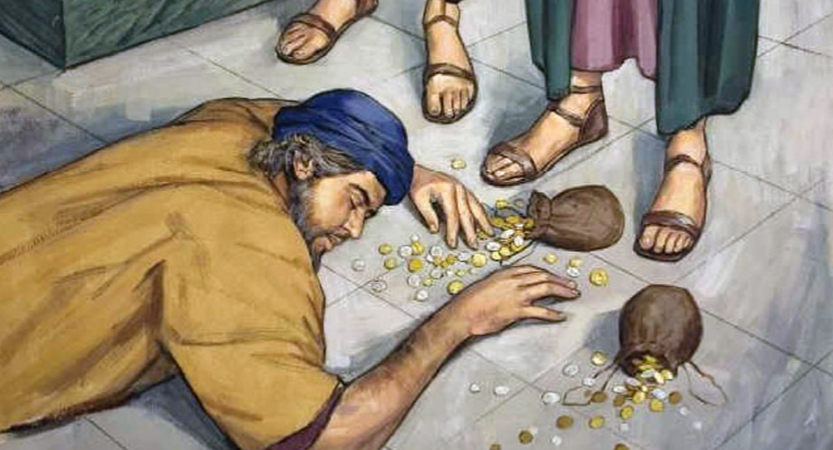 In my last post, I laid out a plan for studying the behavior and consequent deaths of Ananias and his wife Sapphira, described in Acts 4:32-5:11. We’ll begin our study by looking at marginal notes. What does Scripture mean when indicating that to members of the early church, “all things were common property” (Acts 4:32)? After considering this issue, we’ll move on to look at Ananias and Sapphira. (We’ll look at the marginal notes connected to Barnabas in the next post.)

“All Things Were Common”

The marginal notes in Bible Gateway’s NASB version of the passage direct us to a number of other passages, as shown in the following table:

When we flip to these chapters, then narrow our focus to the immediate context, we’re left with three relevant stories: First, the experience of the 3,000 new believers on the first Pentecost after Christ’s resurrection (Acts 2:37-47); second, the selection of seven deacons to oversee the distribution of food to widows in the early church (Acts 6:1-6); and third, the story of the rich young ruler who had asked Christ what he needed to do to receive eternal life (Matthew 19:16-26).

Let’s take a look at Christ’s interaction with the rich young ruler first. The specific verse indicated through the cross-reference contains Christ’s instruction to the rich young ruler to “sell your possessions and give to the poor” (Matthew 19:21). This statement comes toward the end of the exchange between the young man and Jesus. He had initially asked Christ “what good thing shall I do that I may obtain eternal life?” (verse 16).

Christ did not immediately charge the young man to sell everything. Rather, Jesus first told him to “keep the commandments” (verse 17). Then, after the young man asked for clarification, Christ answered by naming half of the Ten Commandments as well as the command to love one’s neighbor as oneself (Leviticus 19:18).

It’s only after the rich young ruler claims that “All these things I have kept” (verse 20) that Jesus instructs him to sell his possessions to give to the poor. In context, this admonition seems less like general advice about how we should all live, and more like an object lesson for the young man, showing him that he did not yet truly love his neighbor as himself.

A Special Time in the Early Church

The other two stories pointed out by the marginal notes both occur in Acts, relatively close to the passage we’re studying. For that reason, these two stories should help us understand what was going on. The first mention of the early church sharing all things (Acts 2:44) comes on the heels of Peter’s famous Pentecost sermon. Luke, the author of Acts, tells us that Peter’s audience included Jews from all over the known world (verses 5-11).

Peter’s message included much that his audience would have known, but much that was new to them. The knowledge that their nation had crucified the long-awaited Messiah “pierced to the heart” (verse 37), prompting thousands of Peter’s listeners to ask what they should do.

It is in this context that the early church “had all things in common” (verse 44). These Jews had traveled to Jerusalem from all over the world to keep the Feast of Pentecost. Having learned that the Messiah they had all so eagerly awaited had already come, that He had died, and that He had been resurrected, they were keen to learn more. They lingered in Jerusalem.

Stretched to the Limit

Although their resources were stretched beyond their original plans, these Jews from all over the world were determined to stay in Jerusalem and to hear more. This is what prompted those who had an abundance to share with those who did not.

Even the story of the early church choosing seven deacons (Acts 6:1-6) confirms this conclusion. Luke wrote that there was a dispute between the Hellenistic Jews and the native Jews (verse 1), indicating that the travelers from far-flung corners of the known world were still sojourning in Jerusalem. The dispute that prompted the apostles to ask that deacons be chosen was specifically concerned with widows being neglected. This distinction indicates that the resources of the early church were being shared with those individuals most in need.

We’ll save our examination of the marginal notes connected to Barnabas for the next post, moving on to two of the people we want to study: Ananias and Sapphira.

When researching people mentioned in Scripture, I generally first turn to a Bible encyclopedia. Unfortunately, the entries for Ananias and Sapphira in the Encyclopedia of the Bible are both disappointing. They convey no information we haven’t already gathered from the text we’re studying.

The entries do offer opinions about why Ananias and Sapphira died. The entry for Ananias indicates that he died for “his attempted deception.” The entry for Sapphira concludes that she and her husband died as the result of “hypocrisy” and “lying to the Holy Spirit.” I want more than opinions, however. I want facts that will lead me toward real understanding.

I decided that my next step would be to look at this couple in All the Men of the Bible and All the Women of the Bible, two of Herbert Lockyer’s series of “All” books. Again, the entry on Ananias was disappointing, and for the same reason. However, I was surprised to see that the entry on Sapphira was much more extensive, although it, too, contained mostly commentary expressing the opinions of the author.

Even so, there was one very important piece of information at the end of the first paragraph under the heading “Deceit.” Lockyer points out that the words “keep back” in Acts 5:3 come from the same Greek word that “is rendered ‘purloining’ by Titus, and conveys the idea of stealthy and dishonest appropriation (Titus 2:10, KJV).” Lockyer continues, indicating that the same thought “is used of the sin of covetousness by Achan (Joshua 7:1).”

“Kept Back” from the Early Church

This experience of mine highlights an important point about Bible study, and that is to refrain from viewing any resource (other than the Bible) as the final word on a subject. Actively look for clues and leads, as a good detective would. Those bits of information may prompt you to pull out an altogether different resource that you hadn’t yet considered for your study.

To find out, I first checked my Strong’s Exhaustive Concordance of the Bible, where I discovered that these three verses are the only ones in the New Testament where the Greek word occurs. That word is nosphizo (Strong’s 3557), which the concordance defines as “to hold back for oneself, steal by misappropriating.”

I wanted to know more, so I took a look in my Vine’s Complete Expository Dictionary. I found the Greek word nosphizo listed as the 10th entry under the heading “Keep, Keeping.” According to Vine’s, the word means “to set apart, remove.” However, the brief discussion of this word also indicates that the word can mean, “in the middle voice, ‘to set apart for oneself, to purloin.’”

I don’t pretend to be a Greek scholar, but I became interested in the “middle voice,” so I googled the term, looking through several websites, blogs, and forums that appeared in my search. I don’t have time or space to cover this in more detail, and I certainly don’t consider myself qualified to do so. However, I will share a statement about middle voice from one website.

HellenisticGreek.com explains the concept this way: “When the Greek middle voice verb form is used, the subject of the verb is seen as acting upon itself or for its own benefit” (emphasis mine). When Paul uses the word in his letter to Titus, he is specifically writing about slaves stealing from their masters (Titus 2:9-10). In such situations, the slaves have been entrusted with their masters’ possessions, so holding something back for themselves is stealing.

With this information, it’s easy to see how keeping back (for oneself) can be equated with theft, especially when the action is coupled with deception. And it’s also easy to see why this issue was so critical to the early church.

Reading Between the Lines

I do not personally own an interlinear Bible, but fortunately, Bible Gateway has one among the various translations available. When I looked at Acts 5:2-3 in the Mounce Reverse-Interlinear New Testament, I could see that the Greek word nosphizo accounts for the phrase “kept back for himself” in verse 2 and for the phrase “to keep back for yourself” in verse 3.

What Belonged to the Early Church – and to God!

The checking I’ve done may seem like a lot of work for little return, but it’s worth it for two reasons. First, I’ve come to understand why the word is translated the way it is in Acts. Second, and more important, this little exercise has shed light on the nature of the doomed couple’s behavior. Like the slaves Paul addressed, Ananias and Sapphira were taking what rightfully belonged to their master – in this case, God!

This understanding seems contrary to Peter’s words: “While it remained unsold, did it not remain your own? And after it was sold, was it not under your control?” (Acts 5:4). We need to switch gears to find out how it is that Ananias and Sapphira could be stealing from God. We’ll cover that in the next post. In the meantime, please share with me what you’ve been learning from your study of this passage.

Just Who Were the Samaritans?