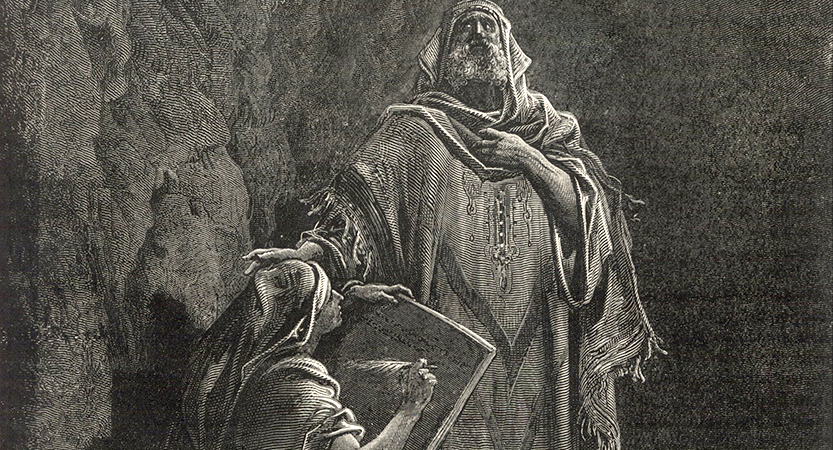 In my last post I asked you to read Jeremiah 45 five or six times in preparation for this study of Baruch. Our look at this chapter will be the first in which I condense our studies to two or three posts.

[In my previous studies, such as our study of Luke 10 (the Parable of the Good Samaritan), and especially our study of Acts 17 (the more noble-minded Bereans), I took the time to include research into dead ends in my posts. I did that to demonstrate that we don’t always know where we’ll find those illuminating nuggets of information. However, from this point forward, I’ll share only the research successes.]

One resource that I have not yet mentioned in previous posts is one that many of us read right over for years, never really paying attention to it. Even when we become aware of this resource, it often lies neglected and rejected as we race through passage after passage in the Bible. I’m referring to those pesky marginal notes. (Ironically, those are the notes for which we have no time when we’re actually young enough to read them without the assistance of reading glasses!)

In Bibles with two columns of text, those notes often occupy a third, narrower column in the center. In other Bibles, these notes may appear at the bottom of the page, or perhaps to one side. In some instances, the notes may actually be connected to a particular word in the text. If so, that word will have a number or letter next to it. That same number or letter will be in the marginal notes, followed by a scriptural citation.

These notes all serve the same purpose. They are the breadcrumbs left behind by biblical scholars who have spent hours cross-referencing scriptures for our benefit. These notes, then, are really a treasure trove of clues for us to investigate! Without ever using an encyclopedia, an atlas, or a concordance, we will discover much about a passage when we take the time to follow these leads.

For this study, I’m using Bible Gateway’s NASB translation of Jeremiah 45. Within the text you’ll notice small letters, set apart in parentheses, in front of specific words. Some of the letters are uppercase, and appear as “(A).” Others are lowercase, such as “(a).” The uppercase letters refer to cross references, whereas the lowercase letters refer to footnotes. [If you don’t see these, then click on the Page Options icon on the right side of the gray bar at the top. This icon looks like a gear. Once you’ve clicked, a drop-down menu allows you to choose to display footnotes and cross references.]

For example, in verse 1 there is an (A) in front of the name Baruch. When I scroll to the bottom of the passage, I see the uppercase letters, such as “A,” followed by one or more scriptures. For cross reference A in this passage, those scriptures appear as: Jer 32:12, 16; 43:3, 6.

If I were using a printed Bible, I would simply flip to those two chapters of Jeremiah. What’s really great about Bible Gateway is that I can simply click on this listing to bring up the all the citations behind a single letter. If I right click rather than left click, I open a new tab so I can see the citations, but also easily refer back to the passage that cited these scriptures. What’s easier than that?

Context for the Life of Baruch

In the five verses of Jeremiah 45, Bible Gateway cites more than 30 scriptures. Here’s a quick round-up of some of the more significant facts we can uncover by checking these citations (and their scriptural context):

As you can see, without ever consulting a commentary, a concordance, an atlas, or an encyclopedia, we’ve already gathered some critical background information for this chapter. These clues will, in turn, be useful as we do turn to other resources.

Who Are You, Baruch?

As we’ve already noted, Jeremiah 45 is unusual in that God directs a mesage to an individual – Baruch. There are other prophecies directed to kings, but very few directed to individuals who were not also in leadership positions. So to understand this chapter, we need to understand just who Baruch was.

The chapter itself tells us that he was the son of Neriah (verse 1), but from the marginal notes we’ve also learned that his grandfather was Mahseiah. To investigate, we can use a concordance to see where those names appear, but we might miss something for the simple reason that translators have not always transliterated the Hebrew into the same English letters.

Another problem with looking for names through the concordance is that you might be dealing with two individuals who happened to have the same name. It’s better to rely on the work of scholars who have already spent hours cross-referencing passages, and who are familiar with other sources that help them make correct identifications.

In my next post, I’ll take a look at who Baruch was, using both the Encyclopedia of the Bible and the Expositor’s Bible Commentary. I’ll also consider the terminology that God uses in His message to Baruch, especially in verse 4. Your assignment is to learn all you can about who Baruch was, and at the same time, to look at God’s message to Baruch.

In the meantime, let me know whether you find marginal notes useful, and how you might use them.

Who Were the Philistines in the Bible?