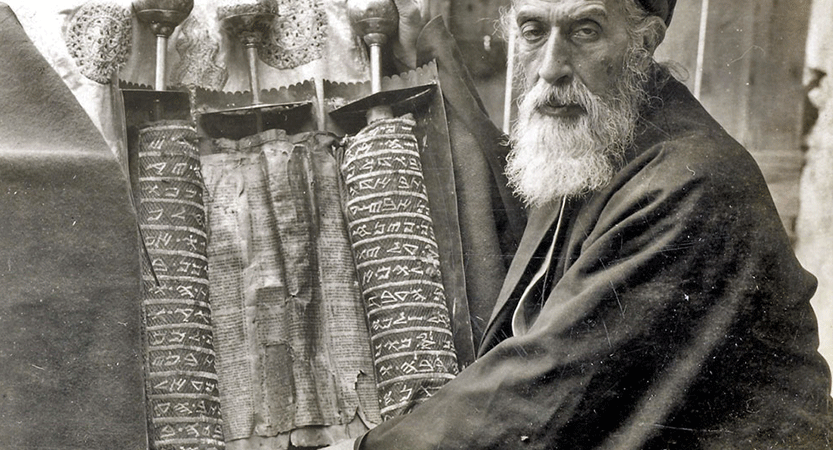 Samaritan high priest with a copy of the Samaritan Pentateuch

This week we’ll wrap up the observation stage of our study of the Parable of the Good Samaritan. We’ll do so by taking a closer look at the single most important note we made as we read through Luke 10. Just who were the Samaritans?

This task is not as easy as it may seem for a couple of reasons. First, the Samaritans left little written material giving us their perspective. What makes matters worse is that much of what has been written has been lost. Second, non-Samaritan sources contradict one another. Even so, there is enough available information for us to gain some insight into the intent of Jesus in making the parable’s hero a Samaritan.

The Samaritan people derived their name from the region of Samaria. This region lies between Galilee to the north and Judea to the south. The city of Samaria is at the heart of this region. Samaria appears approximately 50 to 60 years after Israel broke away from Judah. Omri, a king of Israel, built it as his new capital. The name comes from Shemer, the individual who sold the building site to Omri (1 Kings 16:24). This location is about 40 miles north of Jerusalem.

Following a well-established policy of repopulating conquered territory with other subjugated peoples, the king of Assyria “brought men from Babylon and from Cuthah and from Avva and from Hamath and Sepharvaim” (verse 24) to replace the Israelite population. The Assyrian king did allow a priest of the northern kingdom to return (verses 27-28). The king sent the priest there to teach the newly settled immigrants the religion of Israel.

It is the very next verse that mentions Samaritans as the people who had built the high places. These high places are the sites where the immigrants began placing their own gods. This sole Old Testament reference to Samaritans identifies them as the pre-exile Israelite population.

What we do know is that the conquest of the north did not remove all the people. Some remained in the land into the reign of Josiah in Judah (beginning in about 640 B.C.). This king reigned more than eight decades after the captivity.

These northerners entered the southern kingdom of Judah to celebrate the Passover. We read that “men of Asher, of Manasseh, and of Zebulun…came to Jerusalem” (2 Chronicles 30:11). Samaria sat in the traditional territory of the tribe of Manasseh. It’s reasonable to think of these northern pilgrims as Samaritans.

Moving forward another century, we see the return of the first Jewish exiles to Jerusalem. They returned hoping to rebuild the temple under the leadership of Zerubbabel. The “enemies of Judah and Benjamin” asked Zerubbabel to participate in the rebuilding. The Jewish governor flatly denied their request (Ezra 4:1-3). Were these “enemies” Samaritans?

A few verses later we read how they described themselves to Artaxerxes, the Persian king. After identifying the leaders of their group, they mention “the men of Erech, the Babylonians, the men of Susa, that is, the Elamites, and the rest of the nations which the great and honorable Osnapper deported and settled in the city of Samaria” (verses 9-10). There is no clear indication that they intermarried, or that they called themselves Samaritans.

Another Mount, Another Pentateuch

So what did the Jews have against the Samaritans? There were two major sticking points between the two groups. First and foremost was the issue of where to worship God. The second was the matter of what would be considered Holy Scripture.

The Jews viewed Mount Zion in Jerusalem as the appropriate location for worship. Solomon constructed the first temple on that site. The returning exiles rebuilt the temple in that same location.

The Samaritans, however, worshipped God on Mount Gerizim. This mountain, across from Mount Ebal, played an important role in Old Testament history. It was the mountain that symbolized the blessings for obedience, whereas Mount Ebal symbolized the curses for disobedience (Deuteronomy 11:29).

We do not know exactly when the Samaritans built their own temple on Mount Gerizim. They probably did so between the time of Nehemiah and the time of Alexander the Great. That would have been between the Fifth Century B.C. and the Fourth Century B.C. John Hyrcanus, as leader of an independent Jewish nation, destroyed that temple in 128 B.C.

Jews and Samaritans as Rivals

By the time of Christ, the rivalry between Jew and Samaritan had become entrenched in their respective cultures. John’s gospel reflects this rivalry in the account of the encounter between Jesus and the Samaritan woman (John 4).

In this encounter, Jesus and His disciples stop in a Samaritan town during their journey from Jerusalem to Galilee. John’s gospel describes that town, Sychar, as being close to Jacob’s Well. This detail places the town in the valley between Mount Ebal and Mount Gerizim.

The close proximity to the holy mountain of the Samaritans prepares the reader for the woman’s question. She asked Jesus which mountain He believed was the right place to worship God (verses 19-20).

What is most important about this chapter, for our purposes, is that Jesus remained there two days. He did so in spite of the prejudices of both His disciples and the Samaritans. As a result of that stay, many of the Samaritans “believed because of His word” (verses 40-41).

We need to consider one final question before wrapping up this look at the Samaritans. What is the place of the Samaritans in God’s plan?

The very last words Jesus spoke before He ascended to heaven give us a hint. In those words, He demonstrates His view of the Samaritans as a people distinct from Gentiles: “but you will receive power when the Holy Spirit has come upon you, and you shall be My witnesses both in Jerusalem, and in all Judea and Samaria, and even to the remotest part of the earth” (Acts 1:8, emphasis mine).

This concludes our observation stage of the inductive method, as applied to the Parable of the Good Samaritan. In the next post, we’ll begin the interpretation stage. Your assignment is to consider the structure of Luke 10, then outline it. Feel free to consult a reference. I recommend the Zondervan Pictorial Encyclopedia of the Bible.

Betrayal in the Life of Samson

The Family Tree of Baruch Revealed