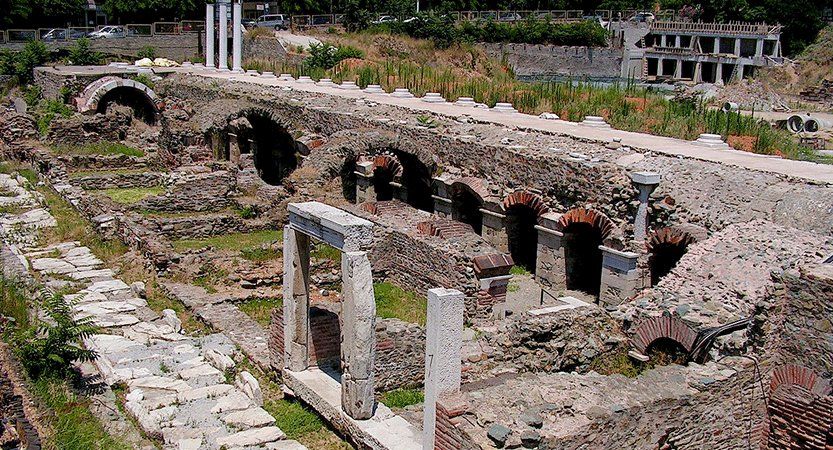 The market place of ancient Thessalonica.

Last week’s blog post was entirely devoted to understanding the term God-fearing Greeks. This week we’ll take a very brief look at some of the other words and expressions of interest in the chapter.

As I’ve mentioned before, one of the tasks you must set for yourself as you dive into an inductive study is that of taking note of words and expressions that strike you as worth a little more investigation. As you read a passage five or six times, you’ll find that some words and terms will jump out at you.

For this post, I’ve put together a small table showing words I decided to spend a little extra time examining. The table gives these expressions in four translations: 1) the King James Version (KJV), which I include because my Strongest Strong’s Exhaustive Concordance of the Bible is keyed to it; 2) the New American Standard Bible (NASB), which is my go-to study Bible because of its faithfulness to the Hebrew and Greek; 3) the New King James Version (NKJV), because it modernizes the KJV; and 4) the English Standard Version (ESV), because of its readability.

Here is the word-study table:

In any type of investigation, whether you’re a student of the Bible or a police detective, you’ll follow up on some leads that go nowhere. The preceding table includes not only leads that paid off, but also words I checked out, discovering nothing of particular interest. I’ve included the duds to make it clear that these will be part of your future studies. And that’s the trade-off you make. To discover hidden treasures, you’ve got to be willing to turn over lots of rocks!

The highlighted entries in the table are the ones I’ve selected to discuss more fully. I believe the table itself, comparing four translations, provides sufficient consideration of the other words.

Who Are These “Lewd Fellows of the Baser Sort”?

Early in the chapter we read that the Jews of Thessalonica decided to stir up trouble for Paul and Silas, so they recruited “some wicked men from the market place” (Acts 17:5, NASB). I thought it might be a good idea to look up the Greek behind “wicked men,” so I went to my King James to see how it translated the verse. I was shocked at the difference.

The King James referred to “certain lewd fellows of the baser sort” (KJV). This is odd because what we mean by lewd today certainly does not seem to be the sort of person who would be recruited to form the nucleus of a riot. Even stranger is the difference between “from the market place” and “of the baser sort.” These phrases are miles apart. What is Luke telling us here?

The first of these words is poneros (Strong’s 4190). According to Vine’s Complete Expository Dictionary, this word “denotes ‘evil that causes labor, pain, sorrow, malignant evil.’” The more modern translations seem to be on track, but the KJV is a little misleading. I’m not sure why this happened. The English word may have changed in nuance through the centuries, or the KJV translators may have chosen a poor word to translate the Greek. Either way, the Greek word is better understood as “wicked” or “evil,” not “lewd.”

What About the Rest of the Verse?

The difference between the phrases “of the baser sort” and “from the marketplace” puts us face-to-face with what appears to be a Greek idiom of the First Century. The Greek word agoraios (Strong’s 60) is related to agora (Strong’s 58), a well-known word referring to a town’s market place.

If you can imagine yourself strolling along the booths and stalls of an ancient market, hearing the continual cacophony of voices desperately attempting to persuade you and other onlookers to part with your money for the goods on display, you might also think about how secure your money pouch is.

That’s because whenever people gather to buy and sell, especially in loud and crowded places, there are always people there for more nefarious purposes. Pickpockets and thieves are side-by-side with the regular folk looking for their own opportunities.

What Did They Mean, “Babbler”?

One of the more interesting words in the chapter is the one the Epicurean and Stoic philosophers used to label Paul (Acts 17:18). All four translations I checked rendered the word as “babbler,” which we might think of as someone who has a real penchant for talking, even when no one around wants to listen. That’s not what the Greek means!

Spermologos (Strong’s 4691) is a compound word, combining speiro (Strong’s 4687) with lego (Strong’s 3004). Strong’s defines the first as “to sow seed” and notes that the second is “the most general term for speaking in the NT.”

Vine’s Complete Expository Dictionary tells us something about the etymology, or origin, of spermologos: it “came to be used as a noun signifying a crow, or some other bird, picking up seeds…. Then it seems to have been used of a man accustomed to hang about the streets and markets, picking up scraps which fall from loads; hence a parasite, who lives at the expense of others, a hanger on.”

Fortunately, Vine’s continues, telling us that “Metaphorically it became used of a man who picks up scraps of information and retails them secondhand, a plagiarist, or of those who make a show, in unscientific style, of knowledge obtained from misunderstanding lectures.”

The Expositor’s Bible Commentary is even more explicit in describing the essence of the term, as used against Paul. The word spermologos referred “to those who snapped up ideas of others and peddled them as their own without understanding them.”

This last description provides some insight into Paul’s encounter with the philosophers in Athens. They later heard him quoting their own poets (Acts 17:28), and discussing some concepts familiar to them. (It’s reasonable to believe he had made similar statements before being labeled a babbler.) Paul’s conclusions, however, seemed so foreign to some of these men that they considered him as someone with only a superficial understanding of their philosophies.

Next week we’ll move from our word studies to taking a look at the geography of the chapter. In the meantime, please let me know what you have learned about some of the terms in your study of this passage. I’d love to hear your thoughts, and I’d also like to know what you’ve dug up.

The Berean Incident: Who Was Silas?