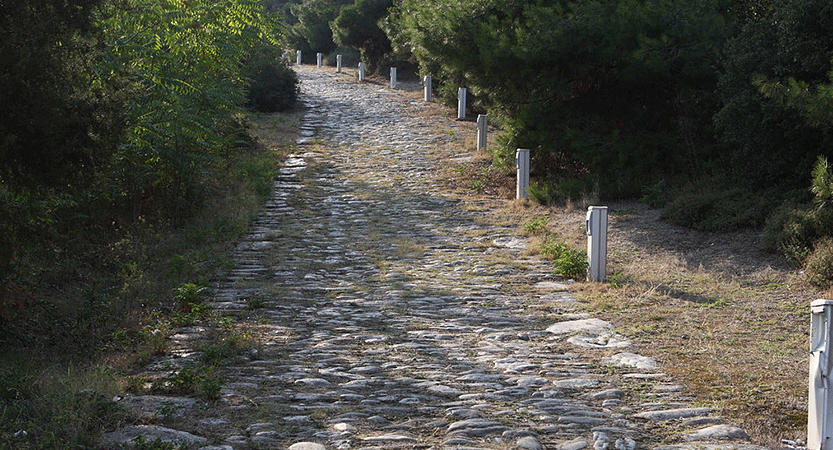 In my last post I wrapped up the word studies for the chapter, looking at the wicked men recruited from the market place to riot against Paul and his companions, and looking at babbler, the term of derision the Epicurean and Stoic philosophers used to describe Paul. Today we’ll consider the geography of Acts 17.

To do so, we’ll ignore the cities Paul merely passed through, focusing on the three where he spent time preaching the gospel. As I began to study Thessalonica, Berea, and Athens, I noticed something that you, too, may have noticed. It is a geographic element not directly mentioned in the text, but one you can’t help but notice as you study Paul’s movements. That element is the Via Egnatia, a highly important Roman highway connecting so many of the cities Paul visited.

From Rome to Byzantium

Paul began traveling on this road after crossing the Aegean Sea from Troas, in Asia Minor, to reach Macedonia. Neapolis, lying about 10 miles to the southeast of Philippi, was the port where Paul disembarked, and it was here that he picked up the Via Egnatia, or Egnatian Way (Acts 16:11-12).

From the trail of cities Luke mentions in his narrative of Paul’s travels from Neapolis, it’s clear that the apostle traveled along this critical highway. So why was the Via Egnatia important?

Simply put, this important highway connected the Adriatic Sea to the Aegean Sea, permitting overland travel. Since sailing in and around the Mediterranean became too dangerous in the fall, such an overland route was a crucial alternative. For merchants, the road was valuable, but for the Roman Empire, it was a military necessity allowing rapid deployment of their legions.

The ancient history website livius.org points out that the Via Egnatia, in combination with Italy’s north-south Via Appia, or Appian Way, linked Rome with Byzantium in Asia Minor: “anyone coming from Rome and travelling to the east, would come to Brundisium, cross the Adriatic, reach Dyrrhachium (or Apollonia), and continue along the Via Egnatia.” Byzantium was the eastern terminus of this 1,120 kilometer-highway (696 miles).

The most significant city mentioned in Acts 17 is Thessalonica, which may surprise you. It certainly came as a surprise to me! I had expected more of Athens, the city of Socrates and Plato, and the home of the Parthenon. These, however, belonged to an Athens of another time.

The Thessalonica of Paul’s day, on the other hand, laid claim to some enviable features. Among them was a harbor astride the northernmost tip of the Thermaic Gulf, offering easy access to the Aegean and the south. The city also sat midway along the Via Egnatia, and it was the terminus of another major road from the Danube in the north. In short, it was a commercial hub, and it was the wealthiest city of Macedonia.

Thessalonica also served as the provincial capital, and as the home of the Roman proconsul. In addition, it had been granted status as a free city, or one that was self-governed. That’s why Luke uses a unique term, politarch (Strong’s 4173), when he writes about the rulers of the city (KJV), or city authorities (NASB). According to Zondervan’s Pictorial Encyclopedia of the Bible (missing from the digital version), Luke’s use of the word “was once dismissed as a mistake” but is now recognized as a Macedonian term.

All these attributes have resulted in the city being “called the key of the whole of Macedonia” (Concise Bible Atlas, p. 229, J. Carl Laney, Hendrickson Publishers, 2003). As a crossroads, it certainly was a key in the spread of the gospel. Paul alludes to this role of the city when he wrote to the church there: “For the word of the Lord has sounded forth from you, not only in Macedonia and Achaia, but also in every place your faith toward God has gone forth, so that we have no need to say anything” (1 Thessalonians 1:8).

A Refuge “Off the Beaten Track”

Unlike Neapolis, Philippi, Amphipolis, Apollonia, and Thessalonica, Berea was not on the Via Egnatia. It was a small city with no particular political, military, or economic importance. In fact, the Roman statesman and philosopher Cicero once described Berea as “off the beaten track.”

So why did Paul travel 40 miles from Thessalonica to Berea?

Remember, Paul left the bustling commercial hub of Thessalonica at night (Acts 17:10). His purpose was not based on plans for preaching the gospel, but for getting away from an angry mob. That is undoubtedly why Paul left the main road, traveling in a direction would-be pursuers would never guess. And that’s why the Concise Bible Atlas states that Berea’s “significance in Luke’s narrative lies in its secluded nature” (p. 230).

Berea was a place of momentary refuge, an accidental stop along Paul’s missionary journey. So, too, it seems, was Athens.

Humbled by the Centuries

Leaving Berea in haste, Paul traveled by sea to Athens (Acts 17:14-15), again just one step ahead of the envious and angry Jews of Thessalonica. The city Paul visits is clearly not the Athens of classical antiquity, but a city humbled by the centuries. Rome had conquered it in the Third Century B.C., and then a Roman army had looted the city in 85 B.C.

By time of Paul, Athens was still considered a center of learning, but with none of its former wealth or glory (Encyclopedia of the Bible). Even so, “Paul seems not to have been greatly impressed by either Athenian intellectualism or the city’s architecture, for he was grieved by the idolatry he saw” (Concise Bible Atlas, p. 231).

There were converts in all three of these cities in which Paul preached, but only in Thessalonica (as far as we can tell from Scripture) did a church take root.

In my next post I’ll take a look at any remaining questions from my initial observations. In the meantime, I’d love to hear your comments!