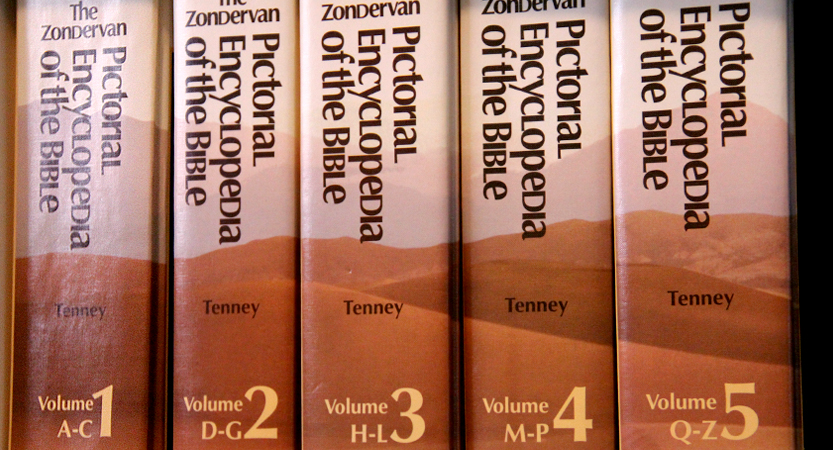 My five-volume Zondervan Pictorial Encyclopedia of the Bible.

In my last post, after wrapping up our study of Acts 17, I wrote that I would devote today’s effort to discussing important resources you’ll want to include in your library. That topic, of course, is quite broad, so I’ll begin with three essentials.

So much of what we read in Scripture is foreign to us. We’re separated from the people of the Bible by centuries, not to mention thousands of miles. We find not only the people, the things they own, and their animals to be unfamiliar, but also their customs, their sayings, and their ideas. So what can we do?

Good Bible study means slowing down. It means, for instance, taking the time to look into why so many events happened at the city gates (Deuteronomy 21:18-19; Ruth 4:1; Psalm 69:12). And it means looking into why first century tax collectors were often mentioned together with sinners (Matthew 9:10; 11:19), or why Christ spoke of tax collectors as a yardstick against which His followers could measure their own behavior (Matthew 5:46).

The easiest way to find answers to the questions you’ll be generating is to search for them in a good Bible encyclopedia. I personally own the five-volume Zondervan Pictorial Encyclopedia of the Bible, and it is an indispensible tool in my library. I’ve also used, and appreciated, the four-volume International Standard Bible Encyclopedia.

If purchasing a good multi-volume encyclopedia is out of the question for you, you might consider a one-volume encyclopedia or dictionary, or even a Bible handbook. These may work for you if you haven’t been studying long, but I’ve never been happy with these. They never seem to have the information I need.

Another possibility is the digital option. For a small subscription price, you can have unlimited access to Bible Gateway’s array of study tools, including the Encyclopedia of the Bible, the online version of the Zondervan Pictorial Encyclopedia of the Bible. I use this tool often, especially when writing my blog. Though fairly comprehensive, this digital version is missing some of the material in my physical hard copy. Even so, it is a far less expensive alternative, and ideal for beginners who would like to use it before sinking too much money into an encyclopedia.

Almost as important as a good Bible encyclopedia is an in-depth Bible atlas. I used to consider a Bible atlas as nice, but not essential. My opinion changed after I enrolled in Historical Geography of the Holy Land, a class at Ambassador College.

For the class, each student had to own a copy of a map manual, which supplied maps that had no boundary lines or place names. It was our task to draw the boundaries of the tribal allotments for the 12 tribes of Israel, or to trace the route of the exodus. Because we used colored pencils to complete our maps, we students soon nicknamed this course Coloring Class!

In essence, our instructor forced us to look more closely at the geographic details in Scripture. We had to in order to complete our assignments! By the end of the semester, we all had a deeper appreciation for how the geography of the ancient Near East shaped the events recorded in the Bible.

You don’t need to grab colored pencils and blank maps to come to a greater appreciation of the geography of the Holy Land. You will, however, need a good atlas. In fact, you may eventually want to own four or five. (I’ll confess that I own five. My favorite is the Holman Bible Atlas, but I also love my Baker’s Bible Atlas and my Moody Atlas of Bible Lands.)

If you want to get the most out of your atlas, or atlases, get into the habit of looking up places as you read through Scripture. Keep the atlas nearby, perhaps opened to maps pertaining to the section of the Bible you happen to be studying. Then, when you read “from Dan to Beersheba” (Judges 20:1) or “from Beersheba even to Dan” (2 Chronicles 30:5), you’ll have a better understanding of what you’ve just read.

Don’t limit the use of your atlas to looking up cities or nations. Take the time to look at the topography of the land. When you do, you’ll begin to comprehend why so many battles have occurred at the otherwise insignificant hill of Megiddo, which in Hebrew is Armageddon, or why worshippers went up to Jerusalem. Also be sure to look at the natural regions, the climate, and any other geographic feature that will broaden your understanding.

At first this practice might seem to be an annoying interruption of your study, but if you keep it up, you’ll begin to develop a feel for the geography of Israel. Eventually, you’ll grasp the reasons Israel’s position, wedged as it was between Mesopotamia and Egypt, accounted for enormous wealth in the days of Solomon, but misery when superpowers collided.

Another important resource for your library is a concordance. Although there are other concordances on the market, I personally believe that your best bet is some version of Strong’s, published by James Strong in the 1890s at the culmination of three decades of work. I own, and will be referring to, The Strongest Strong’s Exhaustive Concordance of the Bible. (The word Exhaustive doesn’t mean you’ll be worn out by using this concordance, but that it includes every word that appears in the Bible.)

If you’re new to Bible study, you might not understand what a concordance is. In short, a concordance tracks words used in the Bible. The bulk of the concordance is a dictionary-style listing of English words that appear in the Bible. Rather than offering definitions, the entries provide lists of verses where the word appears in Scripture.

Here’s where you need to be careful. Many, if not most, concordances are keyed to the King James Version (KJV) of the Bible. If you’re reading the English Standard Version (ESV), the wording will be different. You’ll need to find a concordance keyed to your Bible translation, or you’ll need to keep a KJV around so that you can compare it with your study Bible.

Believe it or not, this portion of the concordance is not the only, or necessarily the most important, use of this tool. Toward the end of the concordance are an index of Hebrew and Aramaic words used in the Old Testament and an index of Greek words used in the New Testament. The Hebrew, Aramaic, and Greek words all have numbers assigned to them, and those numbers appear in the main dictionary-style listing of the English words.

For example, if you were to look up the English word heart, you would find the number 3820 or 3824 beside the vast majority of the Old Testament occurrences of the word. By looking at the Hebrew-Aramaic Dictionary-Index to the Old Testament toward the back of the concordance, you would discover that these are two variations of the same Hebrew word, leb.

The entry also provides a definition of the Hebrew word as well as a listing of how it has been translated into English in different passages. This list begins with the most common translation, working down to the least common. Each word is accompanied by a number set apart by parentheses. These numbers indicate the number of times that particular English word was chosen. As you might imagine, this index is a perfect tool for word studies.

Hey, what about commentaries?

What it boils down to is this – commentaries do the work for you. As such, they can make you lazy in your study. (DISCLAIMER: I admit that I am lazy at times, but when I use commentaries, I try to consult other references as well.)

In future posts I will discuss commentaries as well as some other wonderful resources.

Your next assignment is to read Jeremiah 45 five or six times. It’s a short chapter of only five verses, but an interesting one for the simple reason that it is directed to an individual. In the meantime, please share with me what your favorite, or most helpful, Bible study tools are.

Looking for Paul in All the Wrong Places

What is Context, and Why Is It Important?